Delve deeper into Arkansas’s storied past at these venues from across the state. Explore notable Civil War battlegrounds and Civil Rights exhibits or peruse Native American artifacts and museums of presidential proportions. 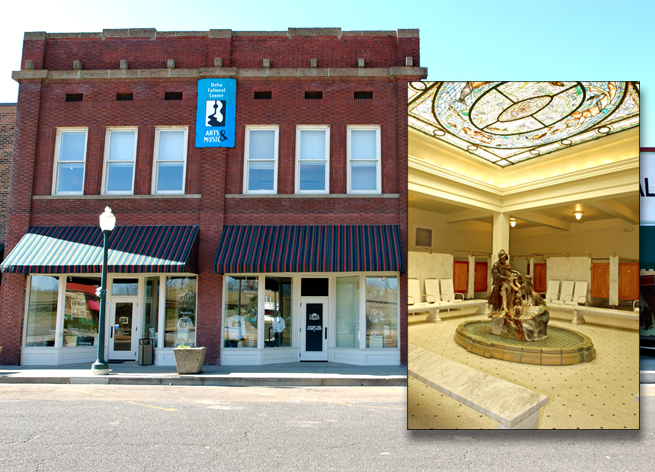 Delve deeper into Arkansas’s storied past at these venues from across the state. Explore notable Civil War battlegrounds and Civil Rights exhibits or peruse Native American artifacts and museums of presidential proportions.

Jacksonville Museum of Military History
100 Veteran’s Circle, Jacksonville
(501) 241-1943
Located on the site of the Jacksonville Ordnance Plant during WWII, it includes many special exhibits and a museum store.

Central Delta Depot Museum
100 W. Cypress St., Brinkley
(870) 589-2124,
The museum contains exhibits focusing on the Louisiana Purchase survey of 1815 and on area railroads and other facets of local history.

Hampson Archeological Museum State Park
2 Lake Drive, Wilson, (870) 655-8622
This museum exhibits a nationally renowned artifact collection from a 15-acre village that thrived between A.D. 1400 and1650 on a meander bend of the Mississippi River.

The Gangster Museum of America
510 Central Ave., Hot Springs
(501) 318-1717
Relive the days when some of the most infamous criminals in America coexisted with the quaint population of Hot Springs.

Arkansas was the site of more than 750 military actions between 1861 and 1865. After Arkansas seceded from the Union in 1861, it became a strategic target for both North and South because of its location on the Mississippi River and its role as a gateway to the Southwest.

The war’s largest battle west of the Mississippi was fought at Pea Ridge in March 1862 and included about 26,000 soldiers. This Union victory dashed Confederate hopes of occupying Missouri. By the time the dust settled, the war touched every community and county in Arkansas.

To memorialize the Civil War’s marked impact on the state, many of the sites are open to visitors as national, state or local parks and museums.

And while this history is fascinating no matter how you get there, the Department of Arkansas Heritage and Arkansas Department of Parks & Tourism created the engaging Civil War Trail, which includes eight scenic routes for motorcyclists and road trippers with notable Civil War markers and sites to explore.

More info: Get a trail map and learn more here.

Be one of the first 1,000 riders to complete all eight Civil War trails and receive your own commemorative patch. Submit at least one photo from each route to GroupTravel@Arkansas.com to qualify.

150 Years of History
The Civil War in Arkansas recently marked its 150th anniversary — the sesquicentennial. For more information about Arkansas Civil War battles and life in Arkansas during the war, visit www.ArkansasCivilWar150.com.

Fort Chaffee Barbershop Museum
7313 Terry St., Fort Smith
(479) 452-4554
This is the historic site where Elvis Presley received his much publicized GI haircut in 1958 when he entered the Army.

Fort Smith National Historic Site
301 Parker Ave., Fort Smith
(479) 783-3961
Explore life on the edge of Indian Territory through the stories of soldiers, dangerous outlaws and the brave lawmen who pursued them.

Heifer Learning Center at Heifer Ranch
55 Heifer Road, Perryville
(501) 889-5124
Heifer Ranch introduces visitors to the idea that one person can make a difference in ending hunger and poverty with programs ranging from day tours to multi-night programs.

Potts Inn Museum
15 Second St., Pottsville
(479) 968-8369
One of the best-preserved stagecoach stations on the Butterfield Overland mail route between Memphis and Fort Smith.

Arkansas Railroad Museum
1700 Port Road, Pine Bluff
(870) 535-8819
The museum houses diesel locomotives, cabooses and baggage cars — all restored to their original splendor, as well as many artifacts used in railroading.

Paul W. Klipsch Museum
200 E. Division St., Hope
(870) 777-8200
The museum, located inside a restored Cairo-Fulton Railroad Depot, is dedicated to the life and achievements of the late Paul W. Klipsch, a Hope resident and an audio engineer who manufactured his world-famous loudspeakers there.

Arkansas: Home to the Arts and Humanitie...

Six of The Best Places in Arkansas to Re...

Meet the Neighbors: Don Bacigalupi of Be...
Permalink
Digital Edition