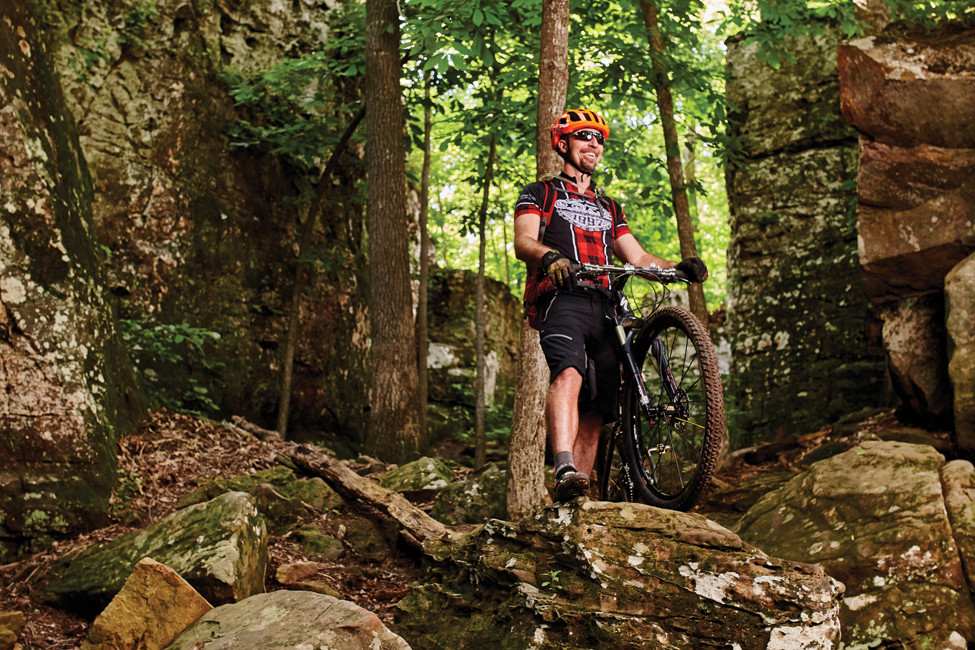 Don’t try to tell Chuck Maxwell that there’s no such thing as love at first sight, because the 46-year-old transplanted Texan knows better.

“Literally, as we drove over the ridge coming up Highway 71 to first come to town it was like, ‘Wow. Yep, this feels right.’ And it has ever since,” he says. “There was this vibe; I knew I had found what I was looking for in a place to live. It felt really similar to Austin, where I grew up.”

Chuck’s wife Gail, a fitness instructor, was in the car and was similarly impressed. “I was blown away by Fayetteville,” she says. “It has a real community feel. I like the fact that we get the four distinct seasons, that was very appealing.”

So began the long-running love affair between Northwest Arkansas and the Maxwells. The Texas natives moved from the concrete and oil fields of Houston where Chuck finished his post-baccalaureate work in perfusion. Fayetteville’s wild and unspoiled landscape — coupling interesting topography with miles of roads to explore — spoke to them both; he as a lifelong cyclist and she as a marathoner and triathlete. It wasn’t long before they’d found a circle of kindred spirits.

“We immediately made friends,” Gail says. “It was a community of very active people, like-minded, open-minded, all-around friendly people.” 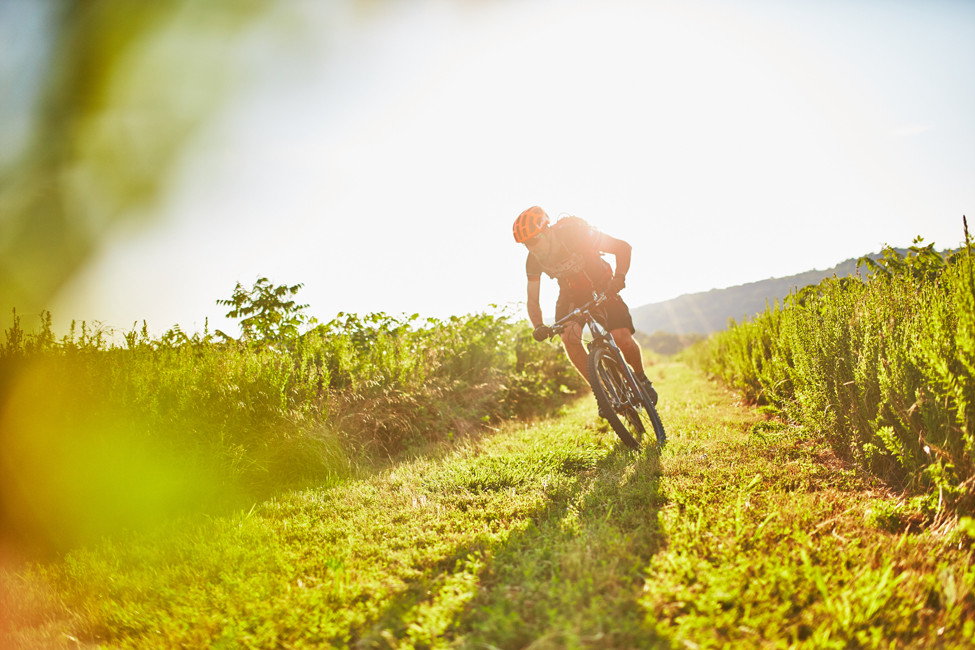 Hatch & Maas Collective
Share It Tweet It Pin It
Atop the dam at Lincoln Lake, Maxwell follows the Spillway Loop Trail at sunset.

What Fayetteville and the surrounding communities did not have at that time was a well-developed set of trails, particularly to accommodate the emerging mountain biking segment of the cycling population.

“Before the 1980s there were no mountain bikes, cycling was virtually all done on the roads and then gravel roads,” Chuck says.

“As mountain biking started taking off, people could see that this was not just a fad and was actually going to continue to progress. At that point, mountain bikers started recognizing in order to have more and better trails, they were going to have to help build and maintain them.”

Ozark Off Road Cyclists, a chapter of the International Mountain Biking Association, formed for just this purpose, a group Chuck not only joined but has helped lead as its president. Throughout its history, the OORC and its members has helped advocate and develop local trails, promote the sport through group rides and sponsor competitive events as part of the Arkansas Mountain Bike Championship Series.

But the group’s most enduring contribution has been building more than 100 miles of mountain bike trails throughout the region. Over the years, the group’s members have become experts in designing and constructing trails that keep one eye on the sport and one on conservation.

“For years, mountain bikers have been educating themselves on how to do it sustainably; how to build trails so they wouldn’t erode, which is a big issue with hiking trails,” Chuck says. “There’s a need for trails, but trails that aren’t damaging to our environment and that are going to be there for longer than the next significant rain event.” 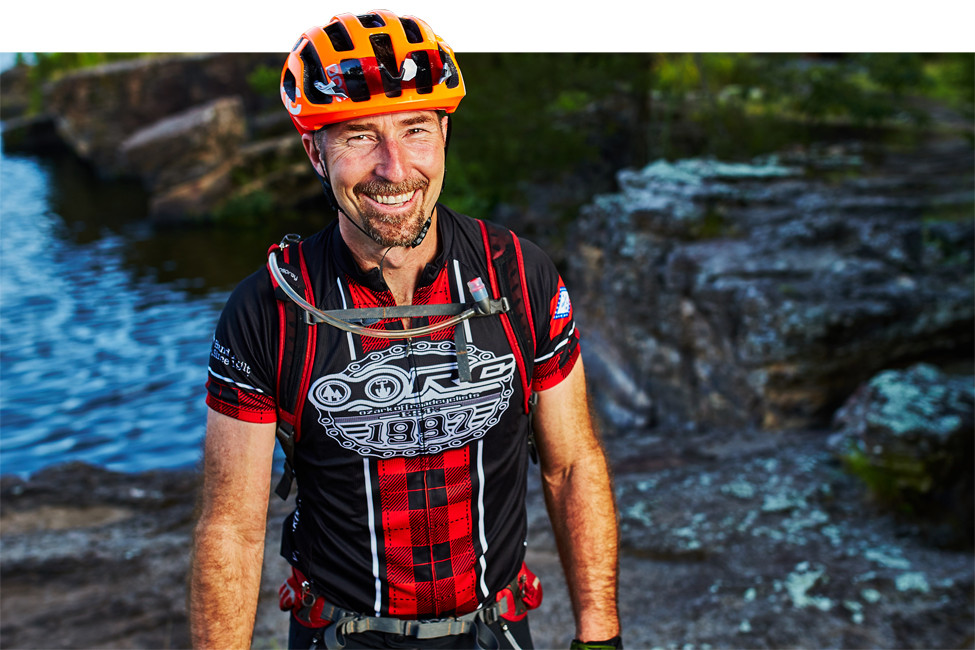 More To Be Done

This grassroots effort has come a long way over the years. The work that has been accomplished has lent considerably to the quality of life in this part of Arkansas, a lifestyle that has revolved around and long revered the outdoors.

“In Arkansas, you’re looking at 3 million people in the whole state. That’s the population of Houston alone,” Chuck says. “I think that’s a big benefit. Even though this area is growing, it’s still a beautiful environment with a lot to offer people who enjoy being outdoors and active, not just for the cycling, but hiking and canoeing and rock climbing, as well.”

“Plus, it’s easy to access that natural environment. You can be just a few minutes away from your local park or take a 30-minute or an hour’s drive to your favorite trail that’s way out in the wilderness where you can go and not see another person for the entire day. There’s an enormous variety in what we offer.”

The trails system developed through OORC and other public and private entities benefit a wider community than just mountain bikers, providing walkers and runners of all ages the facilities to stay active. Gail has experienced this firsthand through her own training as a runner and cyclist. “The diverse terrain is amazing,” Gail says. “The work that Chuck has done at Lake Fayetteville is beautiful; there’s more than six miles there and there are runners out there all the time.”

Today, the trails in Northwest Arkansas represent some of the best riding in the country. Particularly noteworthy are routes at Black Bass Lake and Lake Leatherwood in nearby Eureka Springs, Devil’s Den State Park and Mt. Kessler in Fayetteville, Hobbs State Park in Rogers and Slaughter Pen in Bentonville.

“The mountain biking here represents a real diversity,” Chuck says. “You’ve got everything from The Railyard in Rogers that is specific to a jump-oriented, trick-oriented park for someone in their youth who really enjoys getting off the ground. And, you’ve got very beginner-friendly trails like what’s around Lake Fayetteville or some of Slaughter Pen, just gentle, easy slopes for people to get out on the trail and see what it is to ride off the pavement.”

Perhaps the most conspicuous testament to the active, outdoor culture of Northwest Arkansas is the Razorback Regional Greenway. Completed in 2015 at a cost of about $38 million, the project is comprised of 36 miles of primarily off-road, shared-use trails extending from Bella Vista at the Missouri state line south to Fayetteville. Along the way, six communities and dozens of popular attractions are linked including the University of Arkansas, shopping areas, historic sites and neighborhoods.

The trail has also brought economic development to the communities it connects; all along the Greenway, you can find local restaurants, shops and a growing number of microbreweries and populations as diverse as the geography. Hop off the trail in Fayetteville after a run for a hand-crafted brew at Columbus House or Fossil Cove breweries, or cycle up an appetite for one of Pedalers Pub’s wood-fired pizzas in Bentonville. It’s an eclectic scene Chuck compares to the Austin of his youth.

“I think it has to do with the towns and the environment they create and the age of the families that are living here,” he says. “Especially in today’s day and age ... society recognizes that we have to find a way to be sustainable.”

The Razorback Regional Greenway project, funded primarily through grants by the Walton Family Foundation and the U.S. Department of Transportation, is also the capstone on this growing area’s reputation for excellent outdoor amenities that is gaining nationwide attention.

“We’ve definitely been getting a lot more press that Northwest Arkansas is an affordable place to live and extremely desirable,” Gail says. “I have a connection with a lot of people in Austin and some of them haven’t been to Fayetteville yet, and now they’re asking more questions about it.”

“Sometimes we feel like we’d like to keep it our little secret,” she laughed. “It’s just very comfortable here, definitely a little piece of heaven.” 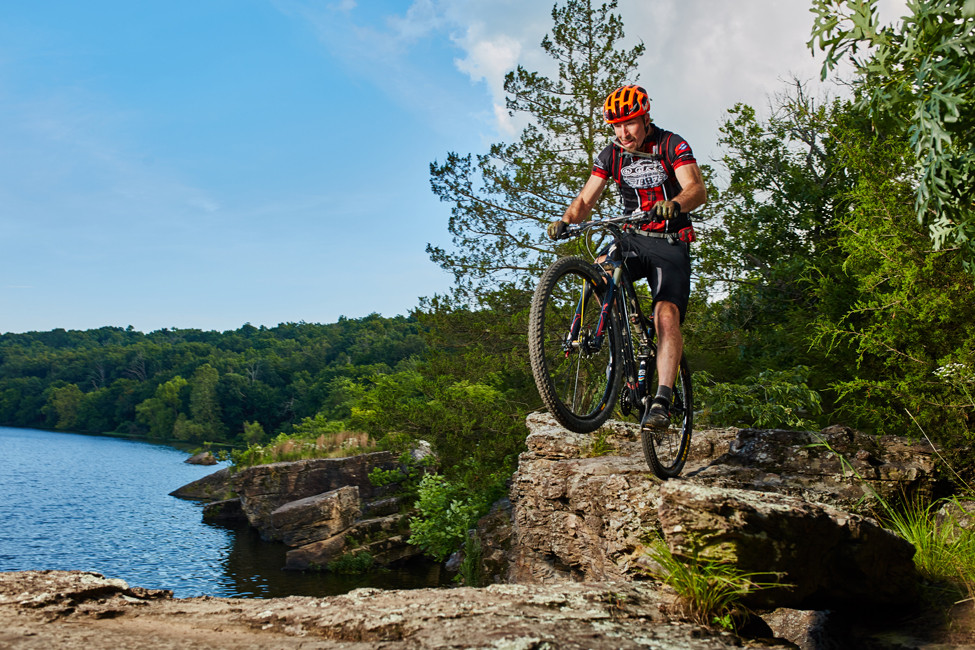 Hatch & Maas Collective
Share It Tweet It Pin It
Chuck touts the diversity of mountain biking trails in Northwest Arkansas. “You’ve got everything from the Railyard in Rogers to jump-oriented parks,” he says.

Find a happy trail of your own at Great Mountain Biking/Cycling Trails to Explore in Every Region of Arkansas.

On the Road: Arkansas' Scenic Routes...

Discover Arkansas: Find Yourself At Home...

Picture Arkansas: A Gallery of The Natur...